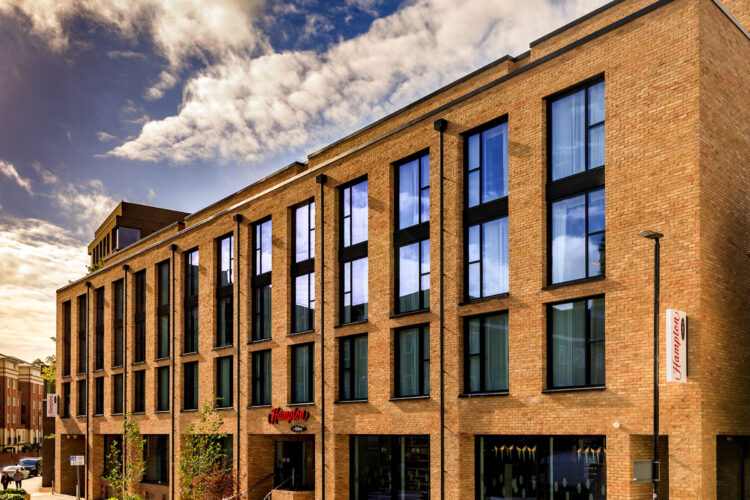 GMI Construction Group has announced the completion of a new 143-bedroom Piccadilly hotel for leading UK hotel specialist Avantis Hotels at a site in the heart of York city centre.

The new Hampton by Hilton building is situated in the Castle Gateway district of the city which has been identified by York City Council as an area of major regeneration and development.

The scheme has been designed to the latest BREEAM standards and boasts cycle parking bays and a number of electric vehicle charging points. A detailed and complimentary landscape design acknowledges the sensitive nature of its surroundings – something guests can enjoy from the hotel’s terrace that overlooks Clifford’s Tower.

Talking about the project GMI Divisional Managing Director Lee Powell said: “This impressive new Hampton by Hilton hotel serves as the 11th hotel development GMI have completed to date and one of the most impressive developments completed so far. We are very pleased to have been appointed by Avantis Hotels on this project and look forward to working together again on further ventures in the near future.”

Also commenting Ravi Majithia, Director – Avantis Hotels said: “GMI have delivered a quality asset to Hilton standards during a very challenging time. Avantis, acting as both developer and owner operators were delighted with the finished product. We were eager to develop and test one of the first “new-prototype” Hampton by Hiltons’ – a refreshed, lifestyle product. We hope this development sparks further regeneration of Piccadilly. GMI also delivered the luxurious Piccadilly Riverside Apartments which look fantastic and are now on sale”.