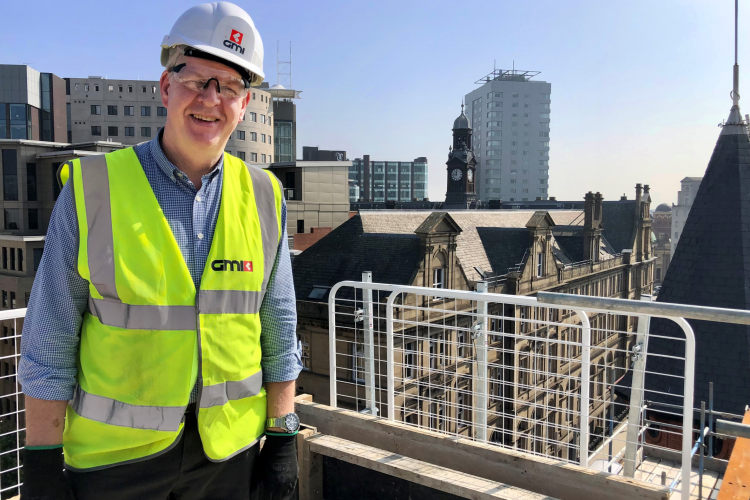 GMI will be the kings of the city when its landmark Leeds City Centre office redevelopment is complete, says Senior Project Manager, Steve Baker.

Steve, 66, is the experienced driver of the fascinating 12 Kings Street project which continues to make solid construction progress while capturing the imagination of city locals and visitors alike.

“Once the job is finished, Kings Street will be one of the big, big talking points in Leeds,” Steve said.

“It’s a project that has drawn lots of interest already. We are not just redeveloping a building, we are redefining it and building a product which will be the envy of people and office workers everywhere, not just in Leeds Business District.”

Steve claims this project could unlock a whole host of similar schemes once we hand over and the quality of the build is revealed.

“What we are doing could bring more high-specification office accommodation to Leeds and we do ‘high spec’ very well at GMI. This building will do something that’s not been done before in terms of office spaces.”

To get there won’t be easy and will require experts like Steve, Site Managers Jacob Inman, David Robertson, QS Tony Willison and the rest of the team to ‘think outside the box’.

Many of the intricate design elements are being designed in a ‘live’ environment as the team work around existing structures and remove concrete that has stood firm for decades.

“I’m told by my peers that it’s the toughest job in Leeds!” Steve added.

“We’re pleased with where we are. It’s full on, long days of high intensity but that’s what we are here to do.”